About domination and its effects: and about resistance to exploitation and abuse through solidarity.

by The People's Cries 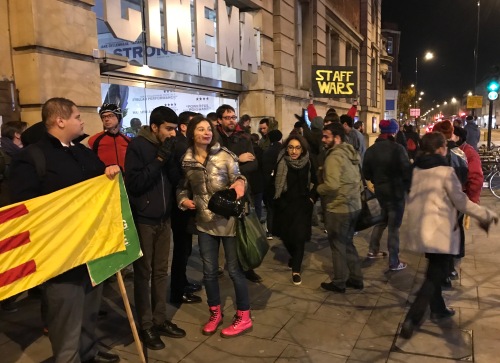 In 2007, Picturehouse staff at The Ritzy cinema in Brixton began a campaign for a Living Wage.

In 2014, following 13 high-profile strikes through their union, BECTU, the Ritzy staff gained a 26% pay rise and an agreement with Picturehouse Cinemas (owned by Cineworld) to re-negotiate towards the London Living Wage in June 2016. The company back-tracked on this and have refused to negotiate in any way.  In 2017 they sacked all but one of the union reps at the Ritzy.

Since then workers at Hackney and Crouch End Picturehouse, Picturehouse Central, and the Duke Of York’s Picturehouse in Brighton have joined the campaign. At these cinemas the company has repeatedly refused to acknowledge BECTU – now a sector of the larger union, Prospect. Instead, Picturehouse recognise the Staff Forum, a  pseudo-union set up and funded by Picturehouse themselves. Seeing no other option, workers have united with the Ritzy in taking industrial action.

In February 2017, after many months of campaigning and over 20 strike days, BECTU officially called for a boycott of all Picturehouse and Cineworld Cinemas until they agree to meaningfully discuss –

This struggle takes place in the  UK context of rampant growth in inequality, attributable in part to the effective crushing and stigmatisation of trades unionism during the neoliberal era.  Cinema ownership as a source of unearned wealth, and cinema work as desperate poverty have followed the trend analysed by Thomas Piketty in ‘Capital in the 21st Century’, the ill-health effects of which have been explored in Wilkinson and Pickett’s ‘The Spirit Level’.

Cineworld Group plc is the second largest cinema operator in Europe with 2,217 screens – 800 of which are in the UK. It is listed on the London Stock Exchange and the FTSE 250 Index, but the Greidinger family hold a controlling bloc as the largest shareholders.  The Guardian reported in 2014 that Cineworld employed 80% of its 4,300 staff on zero hour contracts. That same year Cineworld completed the takeover of Cinema City International N.V., in which the Greidingers already owned a controlling stake.  Just this month, Cineworld bought the US cinema chain Regal for $3.6 (£2.7) billion dollars, which will create the world’s second largest cinema group.

Cineworld made £82million profit in 2016 on a revenue of £797.8 million.  Chief executive Mooky Greidinger was paid over £2.5 million. Picturehouse pitch themselves as an ethical business hosting independent films and selling Fairtrade goods, but their treatment of their workforce exposes this as mere marketing to the social conscience of a particular kind of audience.  An effective social conscience always has to be well-informed. Do not be fooled, and until fair employment practices are set up at Picturehouse and indeed more widely across Cineworld cinemas, support the boycott, and seek out a cinema to go to where staff are respected.

This is relatively easy if you live or work in Hackney, or somewhere near – go to the Dalston Rio, where genuine efforts are made to work with staff to improve their pay and conditions, though this is no easy task in the present climate,  as the cinema also has to survive economically.  Elsewhere, the claim that a cinema is “independent” is clearly not sufficient, for example the Everyman chain, which includes the Screen on the Green, was reported by The Guardian in 2013 to have the entire non-management staff employed on zero-hour contracts, earning just above the minimum wage.  The company has since re-structured its pay system, and is currently in the early stages of the process of introducing 10 hour minimum contracts.  When you go to a cinema, ask to speak to the manager about their employment practices and union recognition, and make your views known if you don’t want to be a party to inflicted poverty: then go to the cinema that is practical to get to, that gives the best answers.